Following the launch of Season 1 of his comic video game satire Game Guy, I have a chat with its creator, Nicholas Abdilla.

When I first met Nick, he was as a reader. A genuine video games fan, he would read through Game Informer each month – of which I was editor at the time – and we’d bump into each other at various trade shows and chat about the industry. For a long time I had wanted to add some great reader content to the magazine and during one of these chats I discovered that Nick was working on a video games comic. Perfect!

The subject matter was bumbling hero Game Guy, whose bumbling adventures did a wonderful job of poking fun at all the silly politics – both real and fanboy – that makes the industry such an energetic and thriving place to me. The online gaming community is an on-going soap opera that Game Guy captured wonderfully, with dialogue and art clearly conceived by someone with a deep love and respect for the medium. So each month Nick would submit a strip, I’d edit it, and it would go in the magazine.

Recently I got back in touch with Nick to see how he was going with his creative endeavours. I was excited to hear a second season of Game Guy had been completed following the first published in Game Informer – and not only that, but a novel, too. A few conversations later and Old Mate Media is going to publish his work, which I am very excited about.

In fact, Season 1 of Game Guy is available right now. You can pick it up on iTunes, or you can pick it up on Amazon. If you love your video games, you will thoroughly enjoy it! And to help you learn a bit more about Nick and his work, here is a quick interview with the man himself and the origins of Game Guy: 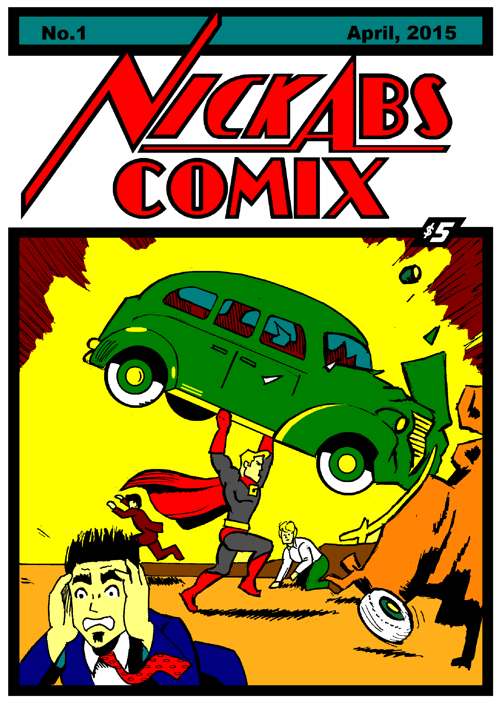 A mock cover for Game Guy, as it would have appeared in the good old days.

How would you describe your history as a gamer?
I would describe myself as an old school gamer. I fell in love with gaming when I was about six-years-old. My dad bought me a Vic-20 and I can still remember rewinding cassette tapes before I could play it. From there I was always getting my hands on the latest device. Commodore 64. An Amstrad with no hard drive. I went through the IBM PC's - 286, 386 and 486. But it wasn't until the first PlayStation that I became a console gamer. Sure, I played the classics like Mario at my friend's places, but it was seeing the first Tomb Raider in action that made me buy a console. I've owned every console since.

When did you first conceive of the idea of Game Guy and how did it come about?
My love of gaming led me to become a manager for EB Games – a chain of retail stores in Australia that is part of the bigger GameStop company in the USA. It was at one of the EB Games conferences that I first ran into Game Informer editor, Chris Stead. My other lifelong passion is cartooning and I asked Chris if he'd ever thought about putting a comic strip in his magazine. He said he had and after checking out some of my stuff we began to correspond.

My idea was a series of parody strips. Each month would be a different gag based on whatever was popular in gaming at the time. Chris suggested the story continue from month to month and from those two ideas Game Guy was born. The series would still be topical and highlight whatever was going on in the gaming industry at the time, but it would be through the eyes of a video game powered superhero.

What was in your mind as you came up with the look of the character?
I've always thought of Game Guy as intentionally clichéd and his look reflects that. The overly muscular physique. The perfectly coiffed hair. The ridiculously big smile. I would always imagine the cheesy superheroes of the 1940's when drawing and writing Game Guy. 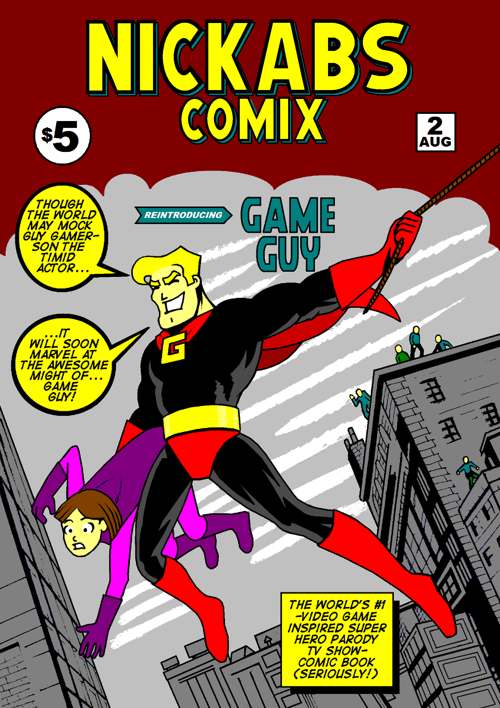 A mock cover for Game Guy, as it would have appeared in the good old days.

Tell us a bit about his sidekick Handheld and the motivations behind the character?
I actually based Handheld on my daughter. She was seven at the time and always had a Nintendo DS in her hand. I thought to myself, "wouldn't it be cool to have a character who was so strong she could save the day without ever having to put down her gaming device." I also really liked the idea of having a sidekick who was actually more competent than the main character, but was more interested in playing games then being a hero.

How far in advance did you have the story arc nutted out as you began each strip?
A lot of the small arcs I would come up with on the fly as events in the gaming industry would inspire me, but the overarching story involving Game Guy's family and Handheld's origins I planned years in advance.

Can you tell us a bit about your process for the illustrations; how long do they take and what programs do you use?
I've always preferred the pen and paper method of drawing over tablets, so I do as much of the strip as I can by hand. Then I scan my work in black and white before adding colour and cleaning up the lines. I use a program called Corel Paintshop Pro X3, which is really old, but I've been working with it for years now so I know it like the back of my hand.

Finally, what can we expect from Season 2?
I really turn everything on its head in Season 2. I had a lot of fun writing it, but I can imagine a few people wondering why I take the series in such an unexpected direction. All I can say is that everything will come together nicely by Season 3.

Remember you can get Game Guy Season 1 right now on iTunes and on Amazon. 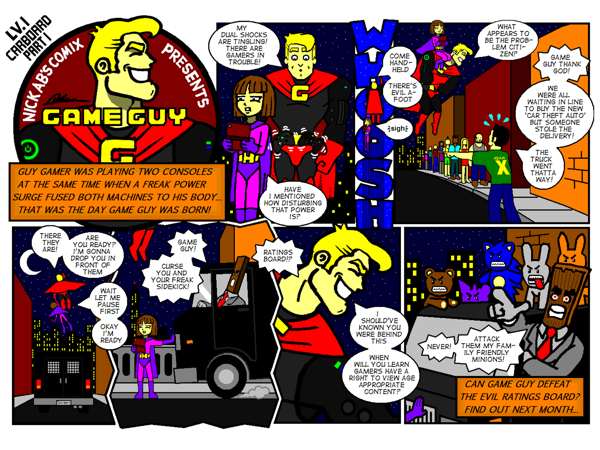 Sneak peak of the first season of the Game Guy comic