My daughter likes to suck things off the floor

My daughter likes to suck things off the floor

For all the good it’s doing her long-term immunity, I'm concerned by my daughter's never-ending desire to lick parts of the city. 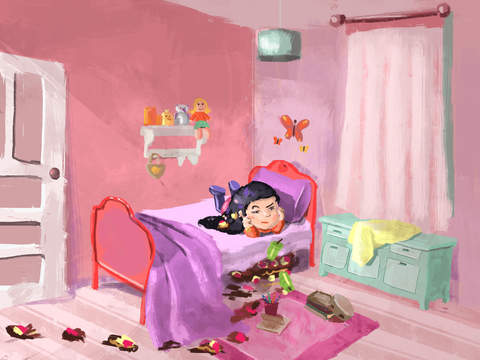 I often wonder if we get more prone to illness as we get older, or if we just get harder hit because we go too far in practicing cleanliness? My children are an argument for the latter. It seems like I am forever trying to avert my offspring from their masochistic tendency to lay out a welcome mat to every and any germ. They seem to gain great pleasure in sucking, licking or consuming things so riddled with bacteria it’s somewhat surprising the little guys haven’t erected a town hall on these days-old apple cores and potato chips.

These acts - which would pack my bags, stamp my passport and send me on a romantic getaway straight to the porcelain throne - seem to have barely any effect on my progeny. Especially my daughter. No wonder they’re not convinced my pleas to “bloody well stop it!”

My daughter, two at the time of this writing, is a unique customer to the spill on isle four at Germworths. Rather than pick up whatever it is that has found a home tucked behind a chair leg or secreted away in a sofa crack, she likes to lie down prone, and mash her face into it, mouth agape. She’s particularly fond of doing this to pools of stagnant water, perhaps congregating on the wooden deck or bathing in a pot plant bowl. Mmmm… mosquito larvae fresh.

It sounds like the unhealthiest thing a human can do, but perhaps it’s actually a healthy beginning to an agile and responsive new immune system. One that is hoping to construct an iron defence against the rigours our 21st century world is set to throw at it over the coming decades. At the very least, I’m sick of feeling like a bad parent about it as I dive like a slips fieldsman towards the outstretched tongue of my horizontal toddler – my screams of “nooo!” echoing out across the neighbour’s yards.

So what is science telling us?

There are some compelling arguments to suggest that our over-cleanliness as a society is having a long-term detrimental effect on the development of our immune system. This relates not only to your classic “bugs,” but also in building up our tolerance to allergies. You can check out the hygiene theory and its related references for one of the earliest established arguments on the theory.

The long and the short of it, however, is that exposure is the ticket to immunity. Vaccinations, for example, are in fact a dead or weakened version of the bug they’re tasked with stopping. They incite our immune system to understand the make-up of these bugs and generate the soldiers to fight it off in preparation of a fully armed invasion happening along one day. These cells have long memories, and will loiter around waiting for the sign of any recurrence so they can defeat it before it takes hold and causes a major meltdown.

Some bugs – like “the flu” – can change their form from season to season, requiring boosters, but the general principle is to train your body to be an effective fighting machine. To keep it out of the ring, so to speak, would just make it weak. This is why we’re more likely to get sick when we are tied, rundown or eating poorly – we’ve let the fuel run low on our defence mechanisms and their reaction time is slowed.

It’s completely reasonable to assume then that the many day-to-day gremlins that are ever-present in human lives are ones we develop an immunity for well before we are at an age to vocalise that we’re not feeling that well. In fact, it starts in the womb with shared blood, and then again at the breast, as the professors at mum’s school of immunity lecture the new breed on that cold harsh world out there. If we actively seek to eradicate these omnipresent bugs from our immediate world by being overly cautious, we’re really just lowering our defences ahead of whatever may lives beyond the front gate.

Today my daughter sucked the Pyrmont Bridge, which did not fill me with joy. So while I’m sure I will continue to sprint from room to room palming my kids off seemingly deadly floor sucking escapades much as a front row forward might swat away outside backs, perhaps I won’t admonish myself so much for those many times my tired legs can’t make it on time.

And anyway, what is that saying? Keep your friends close and your enemies closer.

Trouble at the Zoo - iOS | Android