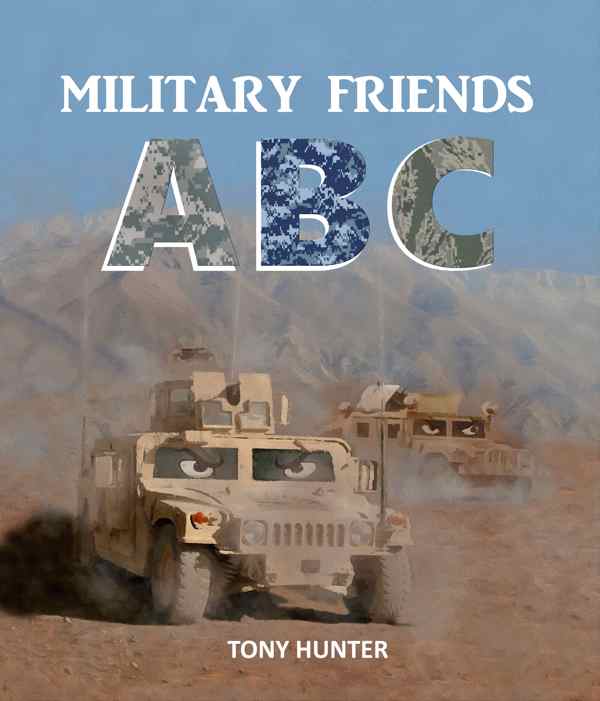 I’m not a military man. In Australia –a relatively young nation locked on an island thousands of miles from anywhere – the military isn’t the cultural priority it is in other regions. We have a lot of respect for our ANZACs, but generally we’d prefer to keep our noses out of overseas conflicts. When I first saw Military Friends ABC land in my inbox, I was caught off-guard. In my ideal world, my children will never be exposed to war or military life. Would reading them this book encourage that?

But then I read author Tony Hunter’s history.

Hunter is from my corner of the world; from the beautiful and peaceful land of New Zealand. He spent eight years in the Royal New Zealand Air Force, and met his wife while on deployment in Antarctica. Together they worked as civilians alongside the U.S. Air Force and New York Air National Guard, and Hunter now resides in Colorado as a U.S. citizen and father to a son. A student of military history and art, Hunter wanted to share this interest with his son, while also helping him understand more about his profession.

This is something I – and I’m sure all parents – can relate to.

As its title suggests, Military Friends ABC is an early learning children’s picture book that seeks to teach kids the alphabet. The twist here is that it uses the International Radiotelephony Spelling Alphabet as its premise. So that is your Alpha, Bravo, Charlie phonetic alphabet you don’t have to have military experience to know thanks to its widespread use in Hollywood blockbusters.

As well as each page presenting a letter from the alphabet and its phonetic equivalent, there is also a vehicle. That vehicle starts with the page’s letter, of course, and connecting pages are linked together in rhyme. It’s relatively simple text, as you’d expect from a book aimed at this age group. However, the rhymes remain fun and well thought-out, right through to the cute ending.

From an early learning perspective, Hunter has done a great job of providing four touch-points on every page relating to its letter. And I must admit, it’s nice to experience an ABC book that doesn’t simply cover the same rote, clichéd objects on every page. Parent and child will no doubt learn something new here. And I appreciate that none of the associated images look to glorify or sensationalise war. 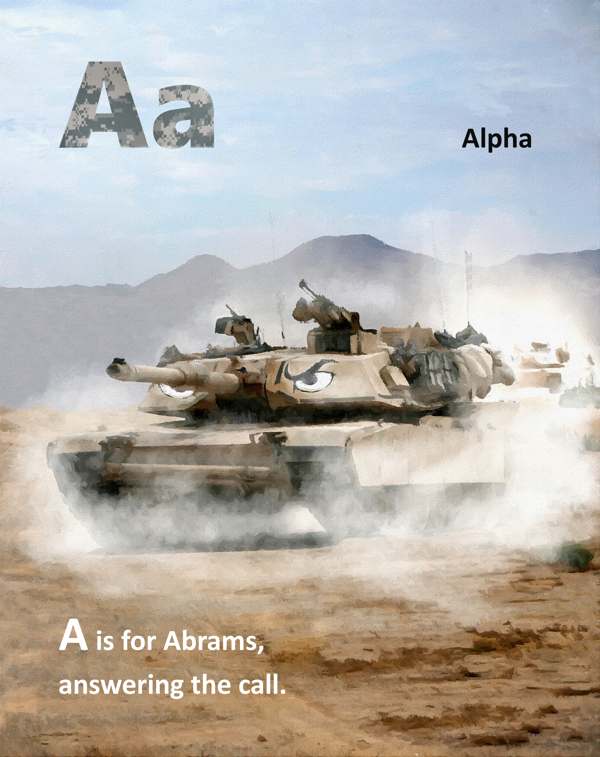 Hunter has taken an intriguing approach to illustrating his book. It looks to me like he has used a photo filter to gift stock photography of military vehicles from ground, sea and air forces with a brushed, cartoon-like look. If I’m wrong, then it’s an impressive artistic impression of realistic military scenes. He has then added emotive eyes to add a feel reminiscent of the Pixar movie series Cars. It works really well, and was no doubt cost-effective to produce, too.

The A4 layout also works well with the image choice, with the central vehicle nicely framed throughout. Unfortunately, the font is a bit hit and miss. By sticking with a white font throughout the book for the main body text, the story is occasionally difficult to read. A solution could have been to change the colour of the font so it stands out against each background image. Alternatively, Hunter could have placed a transparent coloured box under the text so as to help it standout without taking away from the image.

At the end of the day, I’m not sure if I want to read a military-themed book to my children. I’m probably an idealistic hippie at heart. However, I understand Hunter’s intent with this book. And he has done an admirable job of achieving his goal with Military Friends ABC. In fact, I’m sure many children of military parents and kids in general who are fascinated by toys like GI Joe or Army Men, will thoroughly enjoy it.

Are you looking for more great children’s books? Then visit the Old Mate Media library. If you are an author or illustrator looking to make their own children’s book, then look through our services in the main menu, or read our step-by-step guide. For authors and illustrators already published who would like to have their book reviewed, then head here to learn more.