Exciting news! Our very own Willy Nilly and his first book, The Little Green Boat, is being featured on Children’s Books YouTube channel Storytime Pup.


What is Storytime Pup?

Storytime Pup is a children's book focused video channel that aims to be both fun and educational. The channel's mascot, the lovable Storytime Pup, reads children's books aloud while images of each page appear in the background. Together it takes kids for an adventure. He’ll be your child’s new friend (and yours) as he encourages them to use their imagination, plus keeps them moving with fun exercises.

Most of the books Storytime Pup reads are from independent authors, too. This is a great way for parents to introduce their kids to new stories and adventures they're unlikely to find in libraries or local book stores. The channel already has more than 70 videos for you to watch, including many from award-winning authors. Authors like our own Chris Stead. It's a diverse selection, but one aimed at sparking a child's creativity and excitement.

Aside from the storytelling videos, Storytime Pup has interactive segments, too. Magic Window, Seeking & Finding, Let’s Pretend, and Adventure Time.

Sound awesome? Why not check it out for yourself.

We’re thrilled that Storytime Pup shared our beloved Willy Nilly And The Little Green Boat with his audience.

The Little Green Boat is the first book in the Wild Imagination of Willy Nilly Series. In this adventure, a trip to the beach on a hot summer’s day becomes a thrill ride. Willy discovers a little green boat resting on the sand. He jumps in, but is washed out to sea by a giant wave and needs to enlist some dolphins to help him out. They lead him to a secret island and a treasure map. It's here a way home awaits if he can brave the monkeys, bats, crocodiles, bridges, caves and mountains.

After watching Storytime Pup read Willy Nilly below, get your copy for Android devices and Kindle from Amazon, and from iTunes. Now you can share this story with your kids during bed and play time! 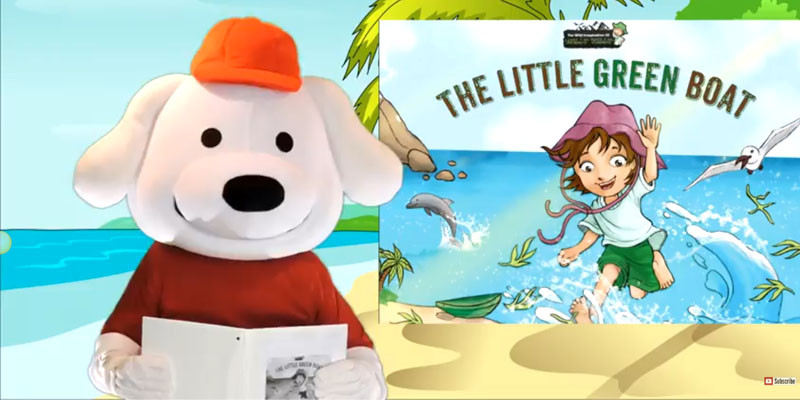 Willy Nilly Has More Adventures, Too

Willy Nilly’s adventure doesn’t stop with The Little Green Boat. In Follow The Breadcrumbs, Willy Nilly gets a great idea while visiting his local lake. What if he build a pond in his backyard? Then his animal friends could come and visit whenever they want. So he uses a path of breadcrumbs to lure them all the way, but he doesn't count on them making such a big mess!

In Willy Nilly’s third adventure, The Fastest Kid in the World, he and his dad build a billy cart. But Willy is disappointed when his dad cannot push it fast enough to do big skids. So Willy decides to take it to the top of the biggest hill in town, and to coat the wheels with slippery soap. If you like fast cars, big jumps, funny crashes and crazy racing, you’ll love what happens next!

Learn more about Willy adventures and get the books at his official site.

Plus don't forget to check out our awesome range of upcoming books. To be the first in the world to discover when the release, and go in the running to win prizes, through out mailing list.