The making of Can You See The Magic?

The making of Can You See The Magic?

Author Chris Stead details the making of his interactive children’s picture book, Can You See the Magic. 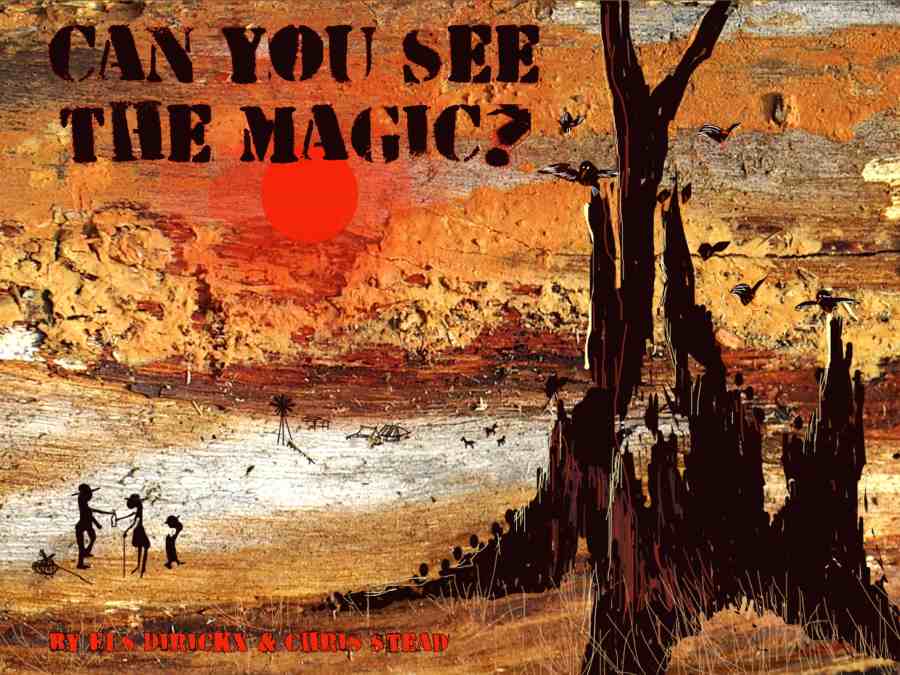 Can You See The Magic? Book Cover

The story behind the making of Can You See The Magic started at a wedding. A good mate of mine was getting married down in the Southern Highlands, south of Sydney Australia. It was a weekender, and the whole family came down to stay on one of the local farms and make a holiday of it. After a rather excellent, rowdy night, we found ourselves walking around the small little village of Bundanoon, desperately seeking coffee. Then it began to rain. Then it began to pour.

With three children, one a baby in a pram, we scrambled into a nearby hall, only to discover a little local market huddled within. Maybe 10 tables all up of people selling handcrafted gifts, local produce or antiques. Waiting for the rain to stop, we wandered around – read: chased the kids and tried to stop them pulling expensive, brittle knick-knacks off tables. It was then that I bumped into Els Dirickx.

Meeting Els Dirickx, artist for Can You See The Magic?

Els, a local resident, is an artist – something of a second career she has discovered in her twilight years. Her role in the making of Can You See The Magic can't be underestimated. She has been working away on a concept she calls Reverse Art, whereby she takes a photo of something mundane and simple from her journeys – like a piece of bark, or a rusted car door – then uses the patterns within to find hidden scenes. She then joins the dots, so to speak, and plays with the colours to create something from nothing. It’s gorgeous! She was selling prints on a little table that day and as I looked through them I was instantly inspired. The making of Can You See The Magic had begun!

Els art immediately made me think of the way children interact with their world. How they can be in the most basic of areas: like a sandpit, or the roots of a tree, and if left to their own imaginations, derive from it an entire fantasy landscape. The next thing you know they are talking out loud, flying a leaf through the air as if it is a dragon and using sticks to build a castle. Reverse Art captures that purity of play perfectly.

So I asked Els directly: would you like to do a book with me? To my great joy, she said yes.

Conceiving the Story for Can You See The Magic?

Over the next few weeks, the making of Can You See The Magic really kicked into gear. Els sent me a catalogue of her work and I selected around 20 images I thought I could link together into a narrative. I then came up with the story about two children on a farm, a boy and a girl, who wanted to prove to their dad there was magic in the world. They pull him away from his chores and take him on a walk around the farm, pointing at objects and asking him to “use magic, and you can see it.”

Of course as an adult who has lost his perspective on play, their father cannot. But the kids keep trying, describing each scene as they stumble on objects with the patterns in them that inspire their imaginations. All the while the sun slowly sets, threatening to end their day before their dad can see the magic.

I was really happy with the way the story had come together. It felt magical and beautiful, and thankfully Els agreed. We spent some time working on the dimensions and getting some consistent size and resolutions to the art, and then I set about editing and designing the book. But for Can You See The Magic to be truly magical, it needed to be more than just words and images – I needed to bring the idea of Reverse Art to life for the kids. And I had an idea.

Bringing Reverse Art to Life Using the Power of an eBook?

Designing a book specifically with digital in mind gives you a whole suite of interactions and animations to play with. Those of you who are familiar with my children’s books will know that I like to use pop-up, interactive text. This is so children can use only the art to decipher the story – a great early learning tool. I also use sounds as an anchor to help immerse them more in the story’s environments. With Can You See The Magic, I wanted to try and create an effect where the kids could see the original photo first. But then see the version after Els had worked her wizardry to bring out a scene from the patterns.

The way I did it was to lay the first image on its own page, with a small bit of text describing what the kids have found on the farm. They then prompt their dad to see the magic. There is then a spinning magic wand, which when tapped creates the sound of a wand flourishing. Once tapped, I get the second image to fade in over the first image over the course of about three seconds. By sitting both pictures directly above each other, the effect is one in which the original image – say a piece of bark – magically transitions into the final piece of art before the kid’s eyes. They love it! An icon then appears that the kids can tap to bring up the next bit of the story.

The making of Can You See The Magic followed a strange path, but I am really proud of the results. It's a collaboration between my story and design, and Els magical artwork. Currently I have the magic trick working a treat on iOS devices – see the video below. However, I only have the book in more traditional story form at present on Kindle. I obviously feel it is still a great story with amazing art on Kindle (and eventually in physical form). But would point to the iOS version as the one to opt for if you have the choice -  both are available here.

I’m hopeful that the book can sell well and pick up some solid word-of-mouth. I’d love to work with Els on another book again in the future. It sure was fun to make. So please, check it out for yourself and if you like it, please leave a review – they are extremely important.